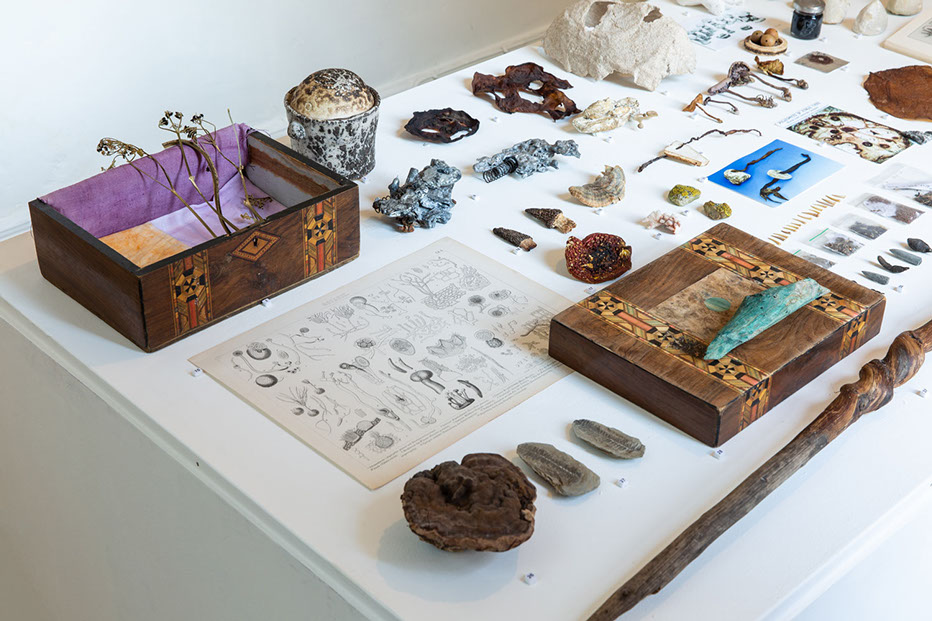 Primeval Symbiosis in The reception was brilliant, Margate, 2019.

Primeval Symbiosis draws upon research into the symbiotic relationships that fungi have formed with plants and humans across great timescales.  A video showed the messy backrooms of museum keepers and mycologists, fossils of 410 million year old fungi in primordial plant stems, and lichen living by the sea in Herne Bay.  Wall mounted forms amplify the microscopic features of these ancient plants and fungi.  The vitrine displayed a collection of 37 found and made specimens based on symbiotic organisms, and archaeological traces of prehistoric mushroom use and fungal collaboration.

Thanks to Open School East for supporting the project. 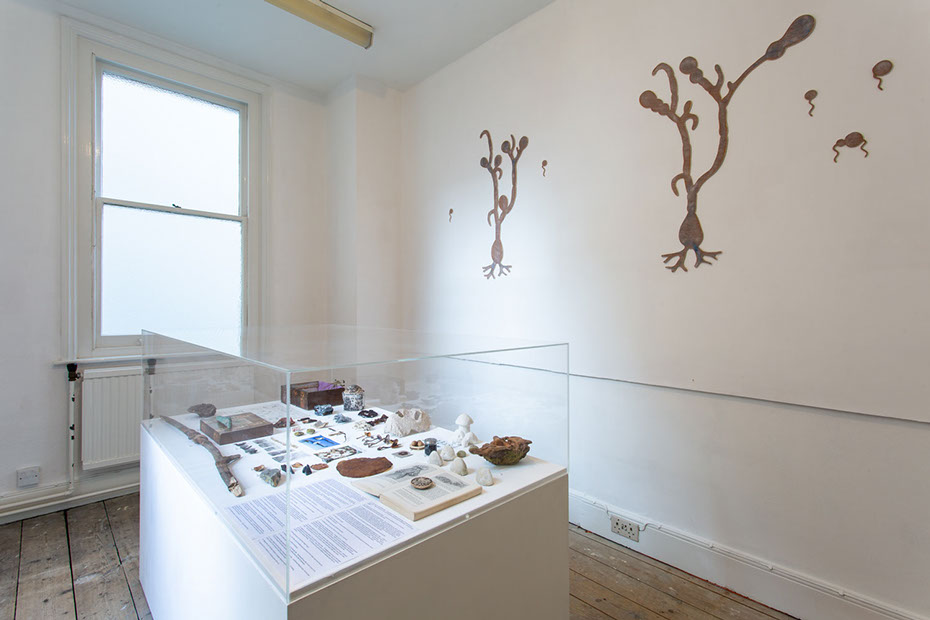 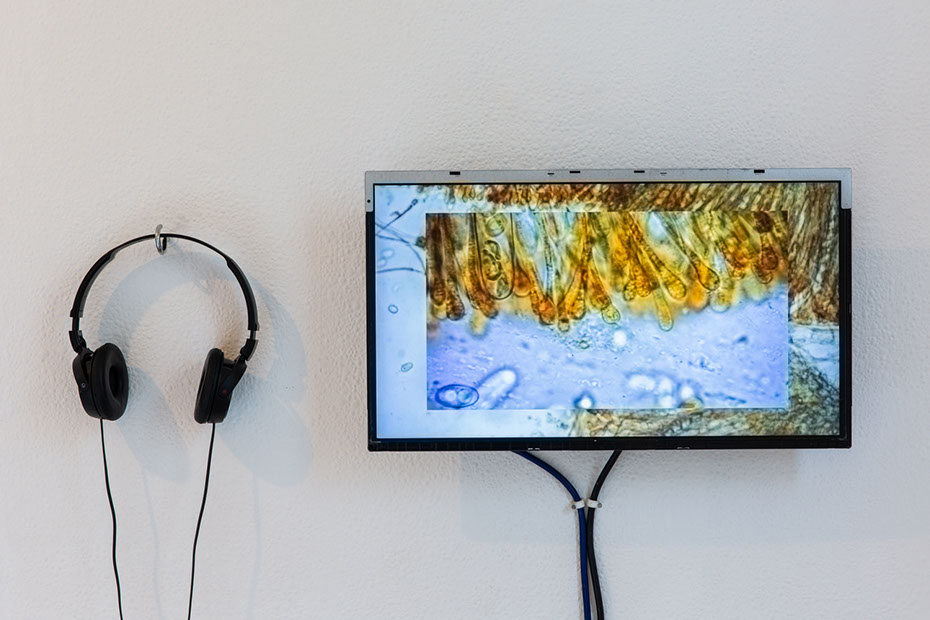 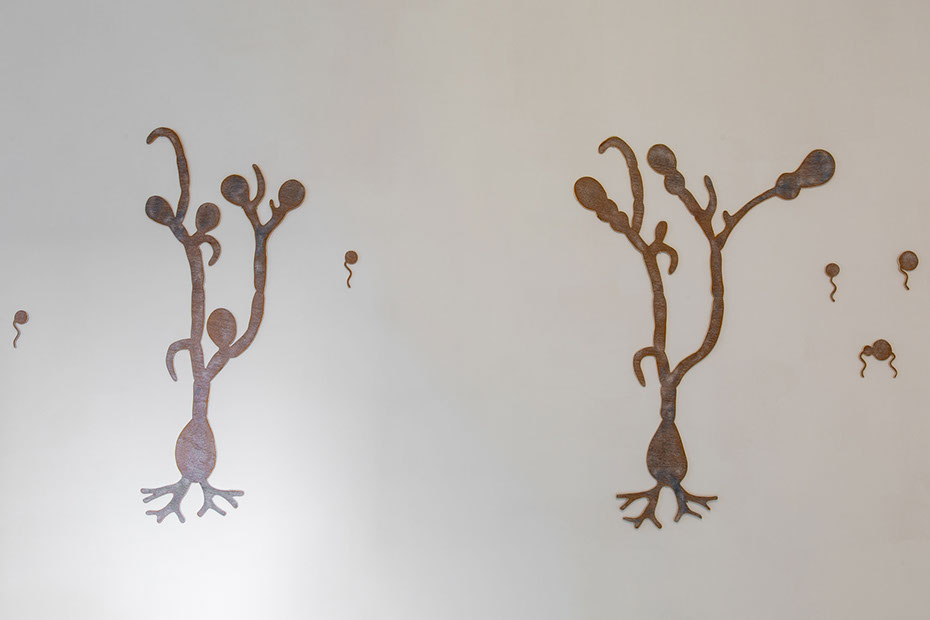 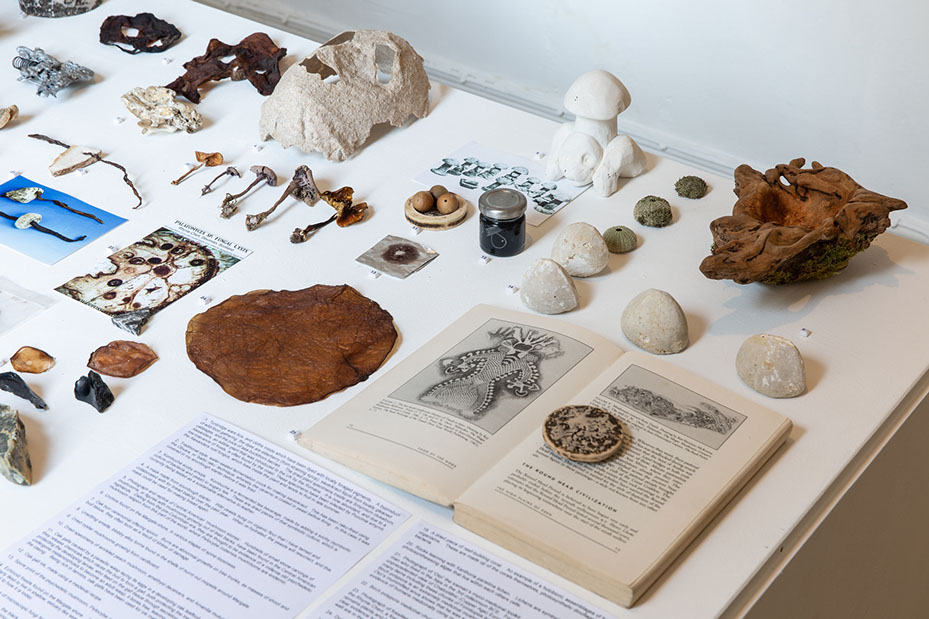 The objects in the vitrine are as follows:

1.Tunbridge ware box, and cloths inside which have been dyed with locally foraged pigments.  A byproduct of wild-food gathering, the dyes are elderberry (from straining syrup), sauerkraut liquid from locally gleaned cabbages, and the juice of sea-buckthorn berries.  The dried plant specimens inside are Smyrnium olusatrum, Alexanders, an edible plant that was introduced to the UK by the Romans.  It is now abundant, and due to a low-tolerance of frosts, is often found by the coast. These specimens have been infected by Puccinia smyrnii, the Alexanders rust fungus, which lives inside the plant and tends to fruit in late summer.

2.Traditional style, water-sealed fermentation crock for making sauerkraut.  This has been raku-fired using the Obvara, or ‘baltic raku’ technique, whereby the ceramic is coated in yeast before firing.  In this case it was covered in my sourdough starter before it was fired.

3.Kombucha scoby emojis.  Kombucha is a fermented tea beverage, made by adding a socby (symbiotic culture of bacteria and yeast) to sugary tea.  These are dried pieces of that symbiotic culture, which is currently being tested as a sustainable alternative to leather.

4.A mask made from sourdough starter.  Wild yeasts living on organic flour that I have tamed and collaborated with for bread-baking over the past year.  When re-hydrated, the yeasts will resurrect, and this mask could be used for making bread again.

5.Photograph and replica of Central American ‘mushroom stones’.  Hundreds of small stone carvings of mushrooms, or figures with mushrooms growing out of their backs, have been found in the Central American highlands.  Dating from the pre-Columbian era, they are thought to be evidence of a millenia old psychedelic mushroom religion from this part of the world, where Psilocybe cubensis mushrooms are endemic.

6.Urchins found on the Margate shore, in various stages of spine-loosiness.

7.Oak burr ceremonial offering spoon.  Burrs are abnormal growths on tree trunks, as masses of shoot and bud tissue, they often form as a result of stress of damage

8.Unwitting smelts, blobby alloy forms found in the shells of burnt out mopeds around Margate.

11.Oak galls caused by a parasitic wasp laying its eggs in a developing oak leafbud.  As the larvae develop they release chemicals which cause the bud to form a gall, both protecting the tree from further infection and protecting the developing larvae, who feed on the gall tissue through secretion.  Once the larvae has undergone metamorphosis to become an adult wasp, it bores free, leaving a small hole as evidence it has left the casing.  Being rich in tannins, oak galls have been used for ink making for hundreds of years.

14.Echinoid fossils found on the Margate shore.  83 million year old relatives of the urchins above, which similarly liked to live in shallow, estuary like seas, indicating that the ancient ocean off of Margate was not so different to how it is today.

15.Engraving of microscopic fungi from the 1870 edition of the Brockhaus Bilder Atlas.

16.Morchella elata, the black morel mushroom.  A highly prized edible mushroom that while not native to the UK, is often found growing on imported wood-chip.  These specimens were found on a wood-chip bed in the corner of a Halfords car park.

17.Dried Amanita muscaria mushroom, which contains many psychoactive compounds, and has been traditionally used in shamanic practices by Lapps in the Far North.  It is widely distributed around the world, and because of its iconic look and mind-altering properties, has been revered by many cultures (you might recognise it as the ‘fairy toadstool’).

19.A dried piece of reef-building coral.  An example of a holobiont, assemblages of hosts and other organisms.  These are made up of the corals themselves, photosynthetic dinoflagellates , and associated bacteria.

20.Rocks teeming with Xanthoria parietina lichen.  Lichens are symbiotic colonies of fungi and photosynthesising algae that live within each others cells.

21.Photograph of ‘Otzi’ the iceman’s myco-medicinal toolkit.  Otzi is a well preserved, natural mummy of a man who lived in the Alps in the 3rd millennium BCE.  Found frozen in ice in the early 90’s, he offers an unprecedented view of Chalcolithic (Copper Age) Europeans.  He was on the move when he died, carrying many items including these chunks of Fomitopsis betulina, the Birch polypore fungus, tied to pieces of leather.

Birch polypore is an extremely medicinal mushroom, and is still abundant today.  Subsequent analysis of Otzi’s mummified anus shows that he was suffering from intestinal worms, which the fungus would help treat, evidence of humans medicinally using mushrooms many thousands of years ago.

23.Photograph of fossilised cysts of paleomyces fungus inside the stem of Aglaophyton major.  A piece of the Rhynie Chert, a fossil deposit in Aberdeenshire, Scotland that contains extraordinarily well preserved remains plants and fungi from one of the first known terrestrial ecosystems, 410 million years ago.  There is clear evidence here of the entangled relationship between these ancient organisms.  The large cutouts on the wall are in the shape of the reproductive organs of some of the fungi preserved in these fossils.

25.‘Food of the Gods’ by Terrence McKenna, which postulates on humans historical and evolutionary use of psychedelic mushrooms

27.Fossilised fern leaf, found by a friend in a charity shop on Dartmoor.

28.Restored antique Tunbridge Ware box lid.  Tunbridge ware is a traditional style of Kentish marquetry (inlaid wood design) that dates back to the 1800’s.  Wood that has been colonised by Chlorociboria aeruginascens, the green elf-cup fungi, whose distinctive mycelium stains the wood blue, was traditionally used in this craft.  This lid has been restored using oak burr wood, and green elf-cup oak.

29.Spines collected from the corpses of Horseshoe crabs on the coast of a Belezian island.  Horseshoe crabs are considered ‘living fossils’, meaning they have existed nearly unchanged for around 450 million years.  They were possibly one of the first complex animals to spend part of their lives on land.

30.Baggies containing wildflower seeds collected in late summer.  The baggies were all found in the hedges and undergrowth surrounding the seedy plants.  Often with crumbs of cannabis left inside, they are evidence of a contemporary botanical mingling.  The wildflower seeds will be scattered on disturbed earth after the exhibition.

34.Obsidian like mining slag stone from the Mendip Hills.  Remnants left over after Cornish miners in the 1700’s re-processed Roman lead mining waste, these shards now litter the landscape.

35.Amadou material from the hoof fungus, Fomes fomentarius.  An extremely effective tinder, this has been used by humans for fire-starting for many thousands of years.

36.Margate flint, which has been knapped in a amateur attempt at neolithic tool-making.

37.Twisted stick from a collaborative, entangled growth with a vine.